The Volkswagen Group, and the brands that comprise it, are rowing in the same direction to save the furniture after the Dieselgate. The future is electricity and all efforts are focused on designing and launching a range of fully electric models. Volkswagen, as a brand, already several projects have advanced, Audi closely follows its movements and Seat and Skoda go a step behind. The German conglomerate’s premium firms are also looking to electrify their models, but not in the short term. 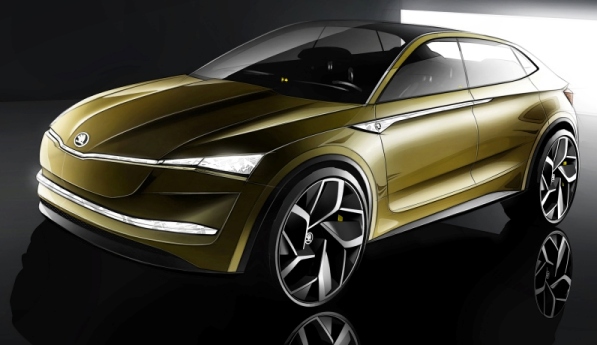 However, the movements of the Czech house go by other routes and as we move forward here, they would present a hundred percent electric model in the imminent Automobile Exhibition in Shanghai. At that time, Bernhard Maier, CEO of Skoda, said that they would first launch a hybrid plug-in version based on Superb and later, by 2020, the first electric model would arrive.

Well, it seems that his words are being fulfilled and, as usual, the first images of the future electric model of the house have just arrived. The Vision E takes the shape of an SUV coupe and electric power plant, which is why we brought you both news. Its measurements are 4,645 meters long, 1,917 meters wide and 1,550 meters high and its wheelbase is about 2,850 meters. The images we have are still sketches, but if the final prototype looks like it, we are facing one of the best designs of the Czech firm.

Its headlights remind people that the SEAT IBX Concept. The whole model is dressed in strong tension lines with which to highlight the SUV strength of its design, giving it a muscular and modern air. Its profile is very reminiscent of the BMW X6; well rear is higher than generally styling in the traditional SUV. The rear part of the model also bears much resemblance to the BMW model, as it cannot hide the niche to which it is directed.

On the side of the car we can see several design elements that will define the personality of the Vision E. On the one hand the volume of metal in front of the glazed joined to the descending line of the roof. With the play between both surfaces highlights the dynamic design of the Skoda concept. In addition, the wheel arches are quite bulky and covered by alloy wheels that will surely measure about 20 inches. A few knobs hidden in the bodywork finish off this area and what appear to be suicide-opening rear doors. 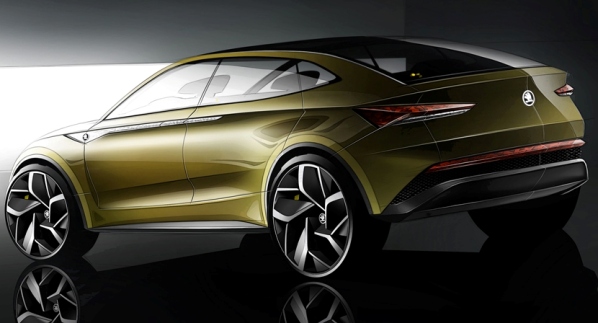 Regarding its electrical mechanics, the Czech firm has already given some details. The power of its powertrain is 225 kW with which it can reach a maximum speed of 180 kph per hour. Its batteries are lithium ion and will allow covering a distance of 500 kilometers between recharges. In addition, the Vision E is the first car of Skoda that has the necessary technology so that it can drive by itself.

According to those responsible for the firm, the Skoda Vision E has enough technology to fulfill the 3rd degree in terms of autonomy. This will allow the model to be autonomous in situations where traffic congestion is high, driving without direct support of driver in highways, performing overtaking maneuvers, staying in a lane or diverting or searching for parking spaces and performing the parking maneuver.

Some of these technologies are already present in several models of the Volkswagen Group, but these are a first in the Czech house. In addition, Skoda has set itself the objective of launching up to 5 100% electric models by the year 2025. However, this electric offensive will start in 2019 with the Superb Hybrid plug-in from which we will provide data as soon as the signature makes them public.