At the end of this year, Toyota will launch the first plug-in hybrid (PHEV) of its RAV4 midsize/large all-rounder, creating the Toyota Rav4 Plug-In Hybrid, and confident that it will be a best seller.

The whole assembly is mounted on the new common platform of the model, The GA-K. This platform, which was conceived to house the battery of hybrid versions under the floor of the car, avoids reducing spaces, habitability and trunk, which remains with 520 liter capacity.

In order to create a clear differentiation from the rest of the range, the Plug-in Hybrid version of the RAV4 includes important details of distinction, both inside and out, focused on a more sporty vision.

On the outside, a new metallic finish is clearly visible in the lower areas of the bumper, as well as darkened areas on its new front to enhance the mesh of the grille, its frame and new closures of the extensions of the fog lights.

At the rear, a metallic finish has been included on the trim, under the rear window, as well as a new black trim on the lower protection.

The “sporty” look of the package is enhanced by the inclusion of the new 18″ and 19″ wheels, designed with very bright and striking metallic finishes and with a set of design through gray and black lines that provide really noticeable visibility.

The interior has also been remodeled. Now it is dominated by the new 9” touch screen (the largest that the model mounts) from which all the functions and entertainment information and connectivity that this model has are controlled. 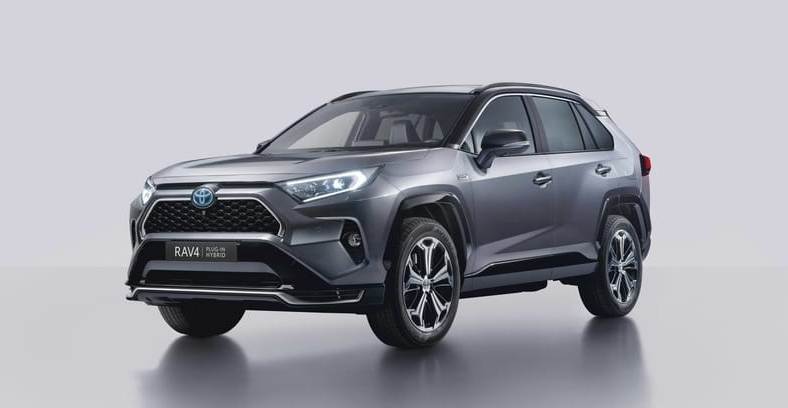 Plug-in but with a signature Toyota hybrid package

The powertrain design has been based on the Toyota RAV4 440h version with its intelligent AWD-i all-wheel drive. It consists of a 2.5 Dynamic Force 4-cylinder heat engine and two electric motors that support the front axle (134 kW and 270 Nm of torque) and the rear axle (40 kW and 121 Nm of torque) with slightly less power. With this set it is possible to achieve a total combined power of 306 hp (including the overlaps between the various motors), of which 186 hp correspond to the heat engine and 197 hp (145 kW) to the electrical set (considering the current supplied by the battery, not the power of the motors).

Although the Toyota Rav4 Plug-In Hybrid is an SUV with capabilities not specially designed for off-road use, the location of the two electric motors to collaborate with each axle provides significant improvements in the model’s all-wheel drive, thus increasing its off-road capability.

To this end, a new “Trail” driving mode has been created in this PHEV version that makes the best use of its all-wheel drive electronically, although it is still lacking as a true all-terrain vehicle.

All this is accompanied by a larger lithium-ion battery (18.1 kW/h) that allows it to reach a range in approved 100% electric mode of 75 kilometers (above the average of its direct competitors). Thanks to this, it has the “ZERO” distinctive from the DGT, which allows it to benefit from numerous advantages: circulate in the center of cities with ecological limitations, use the BUS-HOV lanes, park for free in regulated parking areas, etc.

In purely urban environments, the range of the fully electric RAV 4 Plug-in Hybrid can be extended to 95 to 100 kilometers on a full battery charge.

The new Toyota Rav4 Plug-In Hybrid can reach 135 km/h as top speed in electric mode. In addition, it provides really interesting and sporty performance, going from standstill to 100 km/h in 6.2 seconds, with average CO2 emissions below 29 g/km, finally reaching 22 g/km after official measurements. from Toyota, an enviable level for a car of this size and performance.

Probably the most striking dimension of this new hybrid system mounted on the RAV4, is its consumption level, which in combined cycle stands at 1 liter/100km. An unmatched feature today for any vehicle of this size and performance.

Toyota has announced that the commercialization of this plug-in hybrid version will take place at the end of 2020, if market conditions allow it, at which time we will know its price and final values ​​If we take the Suzuki Across PHEV as a reference, competed quite next to this model, a sale price is expected from approximately €53,700.

New Toyota RAV4, the most versatile SUV in its segment